I'm delighted to release my new album "Barra". This is a compilation of some of my favourite traditional "Fergie tracks", along with the song "Lovely Barra". There is an amazing story in relation to the song as to where I heard it back in the early sixties and also in relation to John Evans who composed the music and words. It's a fantastic catchy song and I hope you all enjoy it! When purchased via my website you will receive a signed copy of the album. 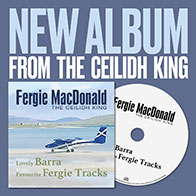 
All CDs will be signed by Fergie

During this dreadful period in our lives, in relation to the Coronavirus pandemic, I thought - what can I do? Come to "Fergie's" and let's have a ceilidh was my decision.

In isolation, life can become very trying for so many people, especially the older generation. So, I hope that this rather unusual album of music and song will help to bring everyone some cheer in these strange times. Regulations forbid artistes meeting and and recording an album in a recording studio. Hence with the aid of a telephone, laptop, and mobile phone, the album was pieced together. Yes, unorthodox methods in extraordinary times. Compiling this album would not have been possible were it not for the help and input of: Addie Harper, Hugh MacAllum, Iain MacFarlane Gordon Gunn, Allan Henderson, Tom Currie, Richard Smith, John MacDonald, Sandy Meldrum and my daughter Morven... to name but a few.

Sounds a good ceilidh to me, even without the traditional dram. Sláinte. 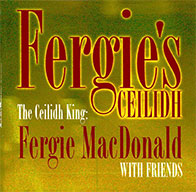 Over the years since 1960 you have listened to my music on cassette, long playing LP and compact disc (CD). National recording companies that produced my albums include EMI, BBC, Thistle, Waverly, Harp, Rannoch, Grampian, Shona, Lismor and Greentrax. Based on sales, top of the charts were achieved along the way. This would not have been possible without your help. A humble 'Thank You' my my dear fans past and present for their loyal support.

My father, John Macdonald, a young Gaelic speaker from a crofting community in Moidart, goes to war!

From mobilization in 1914 to the Armistice in 1918, he was at the sharp end of operations from Suvla Bay in Gallipoli to the Somme on the western front. In Gallipoli he was a battalion sniper with his unit 1st Lovat Scouts. On the western front he was a trained sniper and observer, having graduated from the elite Lovat Scouts Sharpshooter (L. S. S) course in Beauly in early 1917. This is his incredible story.

Over the years I collected and tabulated data in the form of letters, personal diary notes, detailed accounts by men who served with him in the battle zones of Gallipoli and the Somme, and reels of tapes detailing events orally recorded by himself.

In relation to the Somme battle zone where the L. S. S special sniper units operated, little is known as the building housing archives relating to this elite special operation's unit was totally destroyed during a Germanbombing raid on London in 1941 — a direct hit. This being the case, I took it upon myself with the help of my friend, Allan Henderson, to document this very important period of military history, as otherwise it would fade into historical oblivion. I couldn’t let this happen. 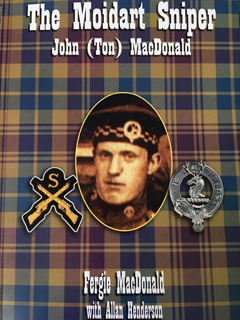 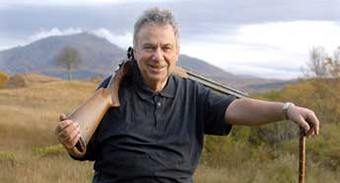 “
I totally agree with the old cliché that music never stands still. Scottish music in particular has been in “fast-forward” gear for many years. The younger generation love it, but the older age group don't really know what to make of it!